generally I'm able to plan for soaking my beans... but not this time. One can par-boil (is that even the right term?) beans and get the same consistancy as soaking, yes? I've never used the "par-boiling" method, so would someone be so kind as to enlighten me?

thank you! x-posted
cross posted in my LJ

I have to say I was inspired by

hiroucla from a few posts back to try the molding thing with fried rice this morning.  I discovered I had some black sesame seeds, along with some sesame oil, which I used a little along with canola oil to fry the rice with some egg-substitute (unfortunately I have to watch the cholesterol...)  I reheated the salmon separately, then layered the seeds, rice, then salmon in a cup, then added drops of Sriracha Hot Chili Sauce and Castillo Salsa Habanera on the plate.  I am thrilled with the results and may end up having to put my rice in a cup like this all the time.

I'm here today to ask you for some help. I've hit a dry spell in my food porniness because of my boyfriend.
He and I have been together for 3 years and I've come to a realization - I've expanded his tastes all that I can.

My SO grew up in a very "simple" household... no fresh onion, garlic or other spices (when used at all); very simple meals (meat and potatoes, meat and rice, etc); few vegetables; nothing fancy or exotic or requiring more than 15 minutes prep and exploration wasn't really encouraged.

I on the other hand grew up in a household where my mother grew her own fresh herbs; we had a vegetable garden and ate mostly vegetable meals during the summer months when the garden was bursting; exotic, new or different foods were on the menu at least once a week and I was encouraged to explore the culinary world.

I love my boyfriend to bits and want to spend the rest of my life with him - it seems silly to get so worked up over something as simple as differing tastes. Is anyone else in this situation? How do you deal? Does anyone have any "simple" recipes that I can expand my limited menu with? Some ideas for new foods that I can try with him that he might like?

Thanks in advance - your help will assist not only myself, but thousands of other sufferers of PPST (Partners of People with Simple Tastes).

(x-posted a bunch of places)

My husband is going to be in Tokyo, Japan on business for 4-8 weeks, leaving very soon. He is allergic to seafood, but is otherwise willing to try things there. Anyone here ever been? any restaurants to recommend?

How to eat steak without a steak knife....

I hate that when you get burger buns, they give you 8 of them. Generally a package of ground meat (we split between buffalo and beef) makes a couple burgers. Well, the other night we had 6 buns and no ground meat. We did, however, have a couple of natural, grass-fed beef tenderloins. Enter the steakburger.

Toasted a couple of buttered buns in a skillet.

Pan-seared two well-trimmed tenderloins to medium-rare, and at the end melted a bit of gorgonzola on them. Placed steaks in buns, ate like a burger.

Served with baby spinach salad, and my own dressing which was balsamic vinegar, extra virgin olive oil, fresh chopped garlic, and Italian spices.

Poached eggs, a layer of Scottish smoked salmon, and a coating of creamed spinach with a parmesan garnish.

(if anyone wants the spinach recipe, I can post it.)
Strawberry Pistachio Smoothie

One of my favorite beverages of the summer season is the smoothie.  The beauty of a smoothie is that you can make it as simple or complex as you want.  There are no rules, just crushed ice and a blender, and whatever you have on hand.

That there is not a lot of meat recipies mentioned here, am I in the minority here being mostly carnivorous? I would love to hear what you think.

If you are a meat eater, how do you like it cooked? For myself I love meat rare to almost raw. hell I would cook it by running it through a warm room if I could.

What sorts of meat do you like to eat? are there many folks who eat game? as opposed to just whats commercially available?

speak up folks I would love to hear about it.

I have been hankering for pressed duck FOREVER! My Mom used to take me to a Chinese food place in Ann Arbor, Mi. for it when I was a kids. The wedges were indescribably crisp and had a lovely sauce and sprinkled with scallions. I have never been able to find a decent substitute and would like to try making it myself. Any foodies with a recipe they've tried or better yet with a Mom or Dad knows how to?
This is one of my very favourite recipes. Ever. *EVVVER*. I never get tired of eating it.

Can anyone recommend a good source for buying small amounts of ostrich jerky? Recently we stopped at an ostrich farm anticipating that we'd find some jerky there, but to our chagrin all they had to offer was the chopped-n-pressed strips made from "beef and ostrich." We want the REAL stuff. The eggs were something else, but I digress.

So, any of you ever try squirrel? I found a great recipe the other day and was it good, no pics though sorry.

6 squirrles, cleaned and quartered and dredged in a mix of rye flour and ground flax seed.
1 onion sliced in rings
1 fist of garlic, crushed and chooped fine. use less if you want but I like garlic.
some good shrooms of whatever kind you like, I used Portobello sliced thick.

you fry the onions and garlic till soft then add the shrooms and cook them fast so that the watter does not come out. then take all this out of pan and add squirrel quarters and sear them on him and keep them moving till they are browned nicley.

reduce heat to medium and add the onion, garlic and shrooms on top of squirrels and cover for 10 min or so, moving them occasionally.

when everything is cooked through and through, you cant eat squirrels rare, it is like chicken. you add a little port wine and some water and make a gravey in the pan with everything.

when the gravey is thick enough ( you can add a little bit more flour, I find rye flour gives a better nuttier taste) you turn off heat and leave covered till you serve it with good southern buiscuits.

I also found that a handfull of toasted sesame seeds sprinkled on top before serving adds a great taste.

it aint fancy but damn it was good.

Take 2 slices of a good hearty wheat bread. I am partial to Brownberry's Health Nut bread. Butter both slices (for grilling) and sprinkle with a garlic pepper blend. On one unbuttered side lay down 2 slices of aged swiss, 2 sliced of smoked turkey (deli), 2 thick slices of tomato and some sliced red onions and then 1 more slice of aged swiss. Grill. Enjoy.

I would have taken a picture but it was too delicious looking to take the time to dig up my camera.

Take my word for it, though. It was beautiful. And delicious. Mmmmm.

We had company over for dinner last night, so I decided to make a really fantastic dinner. They told me it was better than eating in a steakhouse!

Recipes and pics below the cut.
( Collapse )

Chicken and Pork Dumplings yummmmmmm
*edited* Sorry I didnt know i was required to post the recipe
meat with
scallions
garlic
napa cabbage
ginger
salt/petter
1 beaten egg (keeps dumpling from falling apart)
I also added some glass noodles inside. You have to soak them for about 10 mins and cut them into small pieces after draining
( Collapse )

My sister picked up a couple of tuna streaks (in a lime and chili marinade - oooh!) the other day and I've just come across them (still all nicely sealed) in the fridge.

The best before date says the 9th but do you think they'd still be ok, or am I tempting fate? 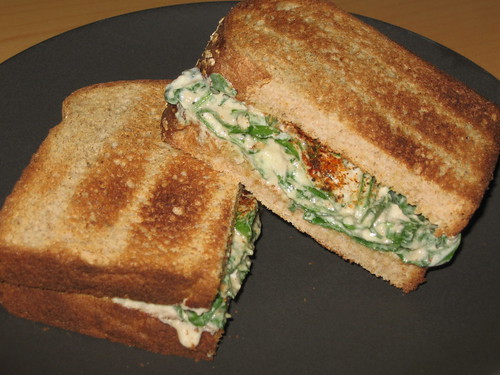 Today I made this for dinner:

( Collapse )
I need to work on my photography skills.
Tonight, I had one of my favorite quick dinners.  I was originally going to be taken out to dinner, but because of a towed car (don't ask) they were cancelled.  I called my friend, and she decided to come by and keep me company for a bit in light of my aborted dinner date.  So I decided to whip up something quick, my favorite quesadillas.  The filling varies according to what's in the pantry, but tonight's version was especially yummy, and not incredibly unhealthy.  Here's what I did:

2 Whole wheat tortillas (the lower the fat and the higher the fiber, the better)
Soyrizo (vegetarian chorizo), you can use real chorizo too, I just happen to like soyrizo
Fresh spinach leaves
Fresh cilantro, roughly chopped
Shredded cheese of your choice ( I use a blend of jack, cheddar, and Oaxaca cheese)
Salsa or pico de gallo (homemade with the last of my tomatoes)
cooked black beans
Cooking spray (I just use one of those oil spritzer bottles with olive oil)

Take a tortilla, and spray it lightly with cooking spray.  Lay it on a baking sheet sprayed side down, and top with a handful of spinach leaves, a sprinkle of cilantro,a crumbling of soyrizo, a quarter cup or so of cheese,  and a quarter cup or so of beans.  Top with a couple of spoonfuls of salsa, and the second tortilla, and spray the top tortilla lightly with cooking spray.  Poke the baking sheet in the oven on 350.  Bake until the tortilla is golden brown and crispy on one side, and then flip over, and bake until the spinach is wilted.  While your quesadilla is baking, get some sour cream (lite or fat free if you must), and mince one pepper from chipotles en adobo, and mix it in the sour cream with a bit of the adobo.  Cut your quesadilla in wedges and serve with the chipotle sour cream and extra pico.

You can bake as many at a time as you can fit on your baking sheet, and you can even double them up by stacking them up with foil in between the layers. (baking sheet, quesadilla, foil, second quesadilla)  You can make them even healthier by using low fat cheese and fat free sour cream.  I've added all kinds of veggies to my quesadillas with delicious results.  I've used onions, peppers, mashed sweet potato, refried beans, mushrooms, whatever I happen to have around.

I recently acquired a copy of Moosewood Low Fat Favorites.

I was wondering if anyone had tried any main dishes that were hearty and that they'd recommend to an omnivore.

I was on allrecipes.com and saw a recipe for potato chip cookies. Has anyone heard of them or made them before?

I had several tomatoes hanging out on the counter; i decided to roast them. I could have left them in longer, but I was too impatient.

I think I'll make a tomato sauce with them tomorrow. Does anyone have any good recipes?

My kidlet is getting baptized in November, and we're having a bit of a party afterward since it will also be his first birthday. I'm thinking that the menu will be styled like a tea party, with multiple little nibbly party-food things to eat, tea and coffee, and birthday cake afterward.

So, great ideas for easy sorts of appetizers that look nice and can be made in advance/with minimal effort?
Collapse